Cape Coral #1. Buy now before it's too late! 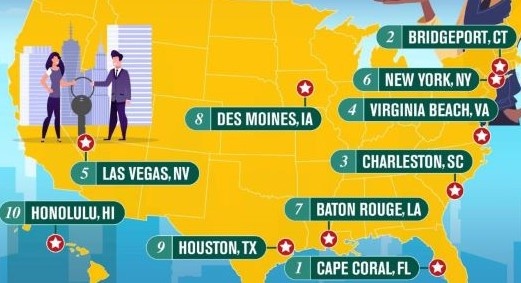 Maybe you've finally come to grips with the crazy, sky's-the-limit prices still sweeping through most major markets. Perhaps you've made peace with the ever-looming threat of another recession. Quite possibly you've even dismissed all that stuff about a coronavirus pandemic, and you're blithely unconcerned about any aftershocks from the upcoming elections.

Nationally, inventory plunged 13.6% in January compared with a year earlier, representing the biggest drop in more than four years. Few markets have been immune to the plunge. There are now 164,000 fewer homes on the market, the fewest number since 2012, when realtor.com® began collecting the data.

In some of the tightest markets, well-priced homes in the most sought-after locations can sell within a few hours of going up for sale. In others, there are enough properties for sale that buyers don't need to make a split-second decision and can be choosier.

"Inventory is falling—even in the easiest markets to buy a home," says realtor.com Chief Economist Danielle Hale. “For buyers, it means there are fewer options to choose from, they have to make quicker decisions when they’re out there shopping, and they're probably also dealing with rising prices.”

So where can buyers get a home without losing their mind, and where would they want to sign up for meditation and relaxation classes? Let's dig into the findings—and the trends they're showing.

Reasonably priced Cape Coral, a city with about 400 miles of canals on Florida's southwestern coast making it popular with vacation home buyers and seniors, snagged our top spot. The area has been affected by recent hurricanes in recent years, which may be why the area has a bit more inventory than other Florida destinations. "It has a city-suburb feeling,". "We have local mom and pop stores instead of big franchises, and geographically we’re very well-protected by the storms because we have these barrier islands in front of us.”.

The metro's median home list price was $325,050 in January, according to realtor.com data.

While Cape Coral inventory may seem high, at 37.9 properties per 1,000 households, it's still falling compared with the previous year. And that's something it has in common with all of the other Florida entries on our larger list (including Miami, Deltona, North Port, and Jacksonville). Lower mortgage interest rates have spurred more buyers to take the plunge, and inventory in Cape Coral actually plunged 22% year over year in January.

Starter and more affordable homes tend to go quick, while the more expensive ones can linger on the market, according to Brad O’Connor, chief economist of the Florida Realtors, the state's Realtors association.